The upward trajectory will be fueled by the growing number of app installs, projected by some to increase from US$204 billion in 2019 to US$258 billion in 2022, with key markets including Indonesia, China, India, and numerous countries in Africa experiencing a surge in app users. As a result, consumer spending in app stores alone reached US$120 billion globally in 2019, AppsFlyer said. According to AppsFlyer, the global projection of app install ad spend is based on a predictive model, drawing on AppsFlyer’s own data which included over 30 billion non-organic installs, US$48 billion in ad spend, and 72,000 apps in a 2017-2019 sample. 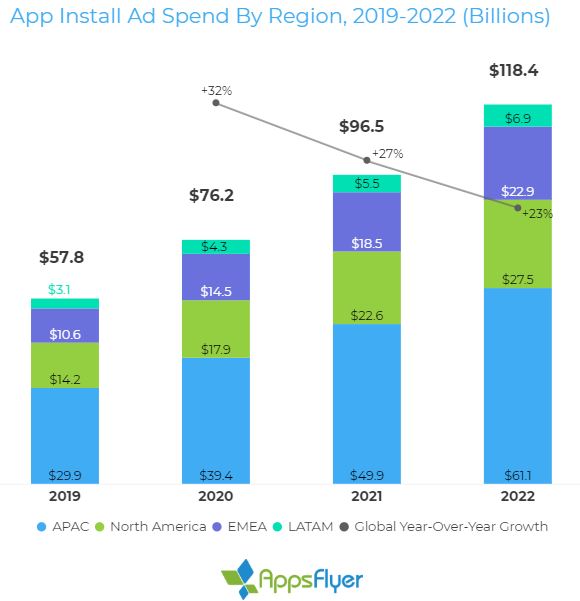 In 2019, Indonesia’s App install ad spend was at US$800 million, while China’s at US$15 billion, Japan’s at US$2.7 billion, and India’s at US$1.2 billion. For Indonesia, the number of mobile internet users is predicted to jump from 106 million 2019 to 126 million in 2022. The top trends for mobile users in Indonesia are digital payments, watching videos and gaming, AppsFlyer said, quoting the e-Conomy SEA 2019 report.

Meanwhile in China, AppsFlyer said an additional 100 million users will be connected to mobile internet by 2022, reaching about 900 million people. App install ad spend is also expected to reach more than US$22 billion in 2022. Although China is home to the largest number of connected users, the fact that Google Play does not operate in the country, but rather hundreds of third party Android stores, makes app install measurement a significant challenge, AppsFlyer said. Nonetheless, advances in market measurability has given AppsFlyer “increased confidence” to include China in the model for the first time despite existing limitations in measurement.

India is also expected to add more than 100 million mobile internet users by 2022. However, despite its sheer size, India has less of an impact on Asia Pacific’s overall app install ad spend because of the extremely low cost of media in the country (only U$0.25 to US$0.28 per install), AppsFlyer said.

By comparison, the North American user base of connected mobile users will only grow 5% by 2022. Europe presents a more diverse landscape for ad spend. While Europe will add 16 million connected users by 2022 (only a 6% growth rate), Africa and Middle East and North Africa, will add no less than 60 million connected mobile users — growing at 20%, with Africa (Sub-Sahara) expected to grow twice as fast as MENA.

Madcradle Online captured Gold and claimed the title of Local Hero for "Fast Growing Agency of the Year" in the Marketing Magazine..

ComfortDelGro Corporation has launched the sale of 50,000 “red dots” to raise funds for charity. ..

O&M's Indonesia CEO Katryna Mojica will take over the top job from Adam O’Conor in March, while O’Conor will focus full-time on hi..